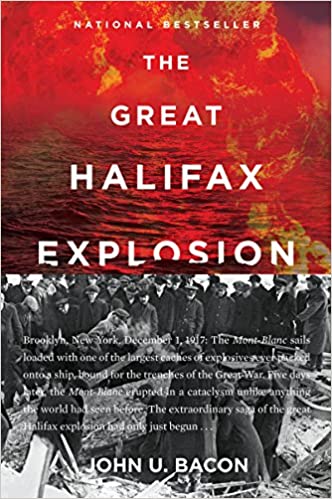 Join us for a lively discussion of The Great Halifax Explosion by John U. Bacon.

This is a ticktock account of fateful decisions that led to doom, the human faces of the blast's 11,000 casualties, and the equally moving individual stories of those who lived and selflessly threw themselves into urgent rescue work that saved thousands.

The shocking scale of the disaster stunned the world, dominating global headlines even amid the calamity of the First World War. Hours after the blast, Boston sent trains and ships filled with doctors, medicine, and money. The explosion would revolutionize pediatric medicine; transform U.S.-Canadian relations; and provide physicist J. Robert Oppenheimer, who studied the Halifax explosion closely when developing the atomic bomb, with history's only real-world case study demonstrating the lethal power of a weapon of mass destruction.

Advance registration for the book discussion is required (as space is limited) and copies of the book will be available on the second floor of the library.